There is perhaps no meteorological event more aesthetically pleasing than a heavy snowfall. The sense that crystalized vapor carries in it the transformative power to invigorate the mundane and ornament the begrimed is among the most wonderful attributes of winter. Yet the transformative powers of snow are not limited to mere aesthetics, for it also carries in it the capacity to transform a public space, and consequently the very essence of a neighborhood.

A street is not often understood as a public space in our current conception of the word. For our lifetimes and the lifetimes of everyone we have ever personally known, streets have been synonymous with motion—synonymous with roads. And the conflation between street and road is indeed an unfortunate one, whereby our confusion is carried through to its design, and set in place by concrete. More precisely, a road is a way from one place to another whereas a street is a place in and of itself. 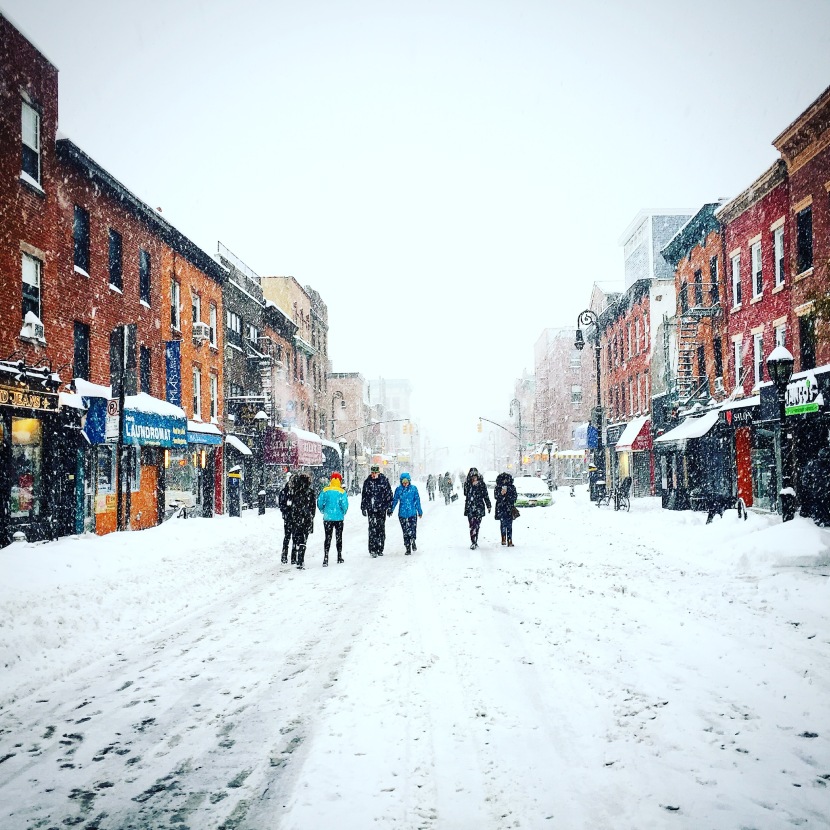 Residents wasted no time in reclaiming a snowy Court Street in Cobble Hill, Brooklyn, NY, during the Blizzard of 2016

A valuable exercise in appreciating the distinction is to think about what streets were used for before the advent of the automobile. Given that the motor car first rolled onto city streets around the turn of the 20th century, whereas the first street grids date back to over 5,000 years ago, the vast majority of historical street uses have been absent of motorized traffic. When I pose this question, a common instinctual answer is that they were used for horse and buggy, or something to that effect. This response betrays our contemporary understanding of a street’s purpose as that of a thoroughfare. Yet for the overwhelming majority of civilized history, the rights-of-way between property lines were places of commerce, places of socializing, and yes, also places of transit. The fact is that a street is—or at least ought to be—all of these things. 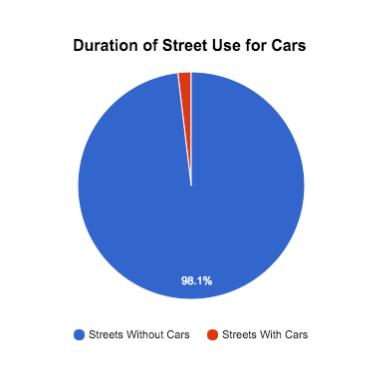 So what does this have to do with crystalized precipitation? When a layer of snow blankets our public rights-of-way, they cloak our sidewalks and pavement markings: our delineation of public space. They create a carte blanche, if you will, for our public right-of-way. Hidden is the asymmetrically allocated cross-sectional width dedicated to motorized traffic in a neighborhood where fewer than half of residents own vehicles. The snow reveals before us the sheer breadth of real estate available to the public, if only we could prioritize it in the image of a safe and healthful city.

What I was most impressed by as I strolled about my Brooklyn neighborhood was how seamlessly people took to reclaiming their public space in the absence of the ever-present danger inherent to motor vehicle traffic. Despite the appreciable snow and wind, scores of people filled the streets throwing snowballs and pulling children on sleds, realizing the fullest potential of what a street can be used for. Of course this was enabled by a travel ban, which effectively endowed residents with the reigns to their own neighborhood, even if only temporarily. And in the event that a motorist did come to pass, they did so slowly, cautiously, and with the understanding that the streets were no longer their exclusive domain.

Even when the travel ban is inevitably lifted, the snow will provide us a canvas to trace the paths of motor vehicles, revealing to us how much space is unnecessarily allocated to drivers in the form of sneckdowns, a portmanteau of “snow” and “neckdown.” The latter of the two words refers to a traffic calming strategy whereby the curb is extended farther into the traveled way in order to reduce the horizontal alignment to slow drivers, facilitate safe right-angle turns, and reduce the crossing distance and exposure to motor traffic for people walking along the sidewalk.

All this is to say that in addition to the snow revealing the beauty in our cities, it also reveals the beauty in potential for our public space. It reminds us that from a design perspective, we really do have carte blanche in determining to whom we allocate this precious real estate. As with most things, the barriers to transformation are political, even if they can be briefly lifted by a fortuitous force of nature.

The #CrotonReservoir was NYC’s first external water source and has continuously supplied it since 1842. This gorgeous dam was completed in 1906 and holds 19 billion gallons of water!
#Richmond, #Virginia: a city I’ve often been near often but rarely within. Glad I got a chance to walk around and see the trailways, freight rails, and industrial architecture along the #JamesRiver, #CanalWalk, and #ShockoeBottom.
Tram Eclipse
Finally made it to the newly opened #MoynihanTrainHall. Looks good but marred by a distinct lack of public seating.
Taken a few weeks ago in the #Catskills. #KaaterskillFalls #PlatteClove
The #ConeyIslandBoardwalk at #dusk.
Joined the spontaneous celebration yesterday at #GrandArmyPlaza—a fitting location to cheer the defeat of a white supremacist fascist president, where the memorial arch was installed to honor the Union soldiers’ and sailors’ victory over the rebelling slave states in the Civil War.
#QueensCountyFarm #CornMaze. #MaizeMaze? #LittleNeck, #Queens, #NYC
A train crosses the #ManhattanBridge through the #fog.
Finally made it to the new #KosciuszkoBridge #BikeNYC path. A nice ride on the bridge, but unfortunately lacking any safe way to get there from the #Brooklyn side. And the #Queens side highlights the absurdity of carving car infrastructure into the middle of a city. #BQE #NYC #CableStayBridge
The nearly $6 billion NYPD budget is larger than the fire, sanitation, transportation, and parks departments combined. Sadly, @nyccouncil is voting on next year’s budget to keep it that way.
This #FathersDay I took my dad's old #SchwinnLeTour out for a photo shoot. #BrooklynBridgePark, #Brooklyn, #NYC. #NYCSkyline
.
No justice, no peace;
#DefundTheNYPD and get rid of their military cosplay
#Manhattan starting to feel more like a foreign country than the place I spent around fifty hours a week for the last five years. #BedStuy, #Brooklyn, #NYC
Proud to make food pantry deliveries this #MayDay with the @maketheroadny #MutualAid #BikeBrigade. Meanwhile, others in the organization are engaging in their #Recovery4All protest at @nygovcuomo's office and @jeffbezos's multimillion dollar mansion. The demands are as follows:
The #StMarksAve Children’s #Playground between #KingstonAve and #AlbanyAve was part of a visionary #superblock pilot spearheaded by #RFK shortly before his assassination. It's a great reminder that not every street must be centered around vehicle throughput. It would be great to see this design replicated across the rest of the city, especially where parks are scarce and children abundant. #CrownHeights, #Brooklyn, #NYC.
#ProspectPl between #KingstonAve and #AlbanyAve has not one but two raised midblock crosswalks, with pavers that rise flush with the sidewalk level. Each corner is marked by a large bench planter and bollards prevent cars from blocking the extended sidewalk that shortens the crossing distance. A+ Design. #CrownHeights, #Brooklyn, #NYC
#Carousel is closed (of course) but spring continues. #ProspectPark, #Brooklyn, #NYC.